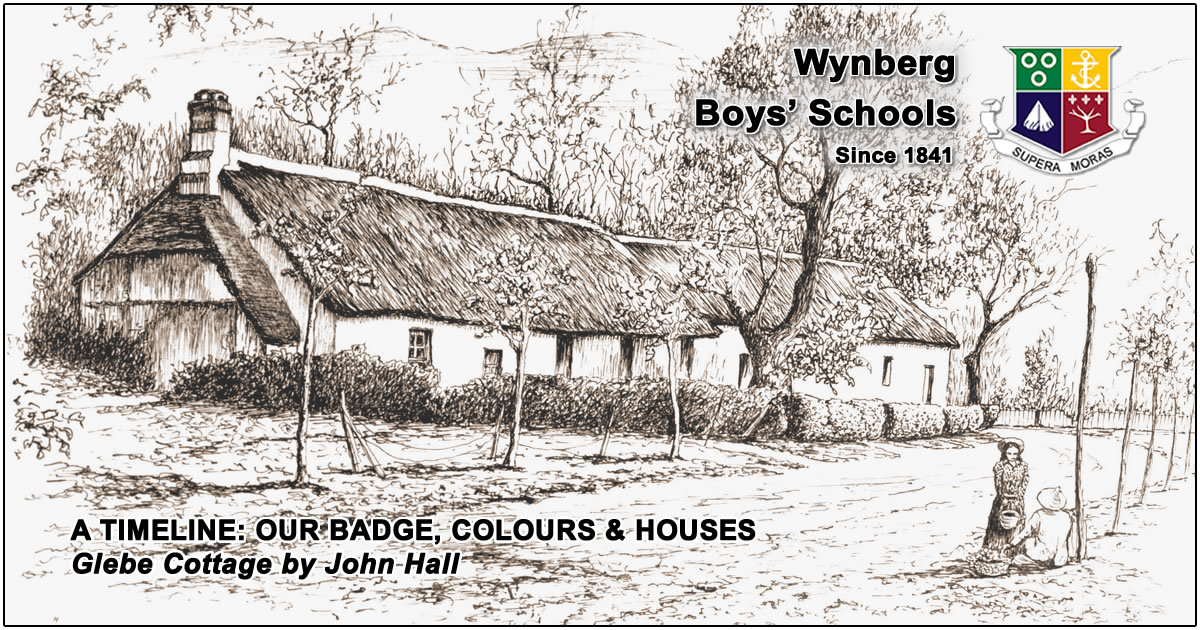 The Badge, Colours, and Houses of the Wynberg Boys’ Schools - a Timeline

Shared between the High & Junior School:

The School Badge, as used since 1924, remains as the shared Wynberg Brand; emblems for the eight Houses will be decided at a future date once the House names and colours are familiarised.

2016 - As part of the Wynberg Boys' Schools' commitment to relevancy and sustainability, and to 'build on the good traditions of the past', an ongoing Social Cohesion Project is launched. One task is to initiate discussion on the relevancy of the House names. Constructive consultation with all role players - students, staff, old boys, parents, and friends of the schools - over an 18 month period, delivers a clear mandate to rename the Houses.

2003 - the High School, on the introduction of the Tutor System and catering to expanded enrollment adds three more houses, during the tenure of Headmaster, Mr Keith Richardson,  Lorie (light blue) was named after the first Headmaster of the independent Junior School, Mr Arnold Lorie; McNaughton (black) after the first Headmaster of the Wynberg Schools; De Villiers (burgundy) after Sir Henry de Villiers (first Baron Wynberg), acclaimed by DH Thomson in his The Story of a School: “Lord de Villiers had fathered and built the school … Like Dr PE Faure before him, his name still has to be incorporated into the daily life ... ”*

1961 - the cover of the Wynberg Boys' School Magazine appears in colour for the first time and with it, the School Badge.

1944 - December, The Friedlander Shield was presented for House competition by Mr and Mrs Alfred Friedlander and their three sons in memory of Cecil Friedlander, son and brother, who matriculated from Wynberg in 1928 and perished in World War II.

1944 - January, Mr Arnold Lorie (who began teaching at Wynberg in 1930) is appointed as the first Headmaster of Wynberg Boys' Junior School when " ... the division [between increasing numbers in the Junior and Senior standards] became a practical reality." *

“This departmental division of the school, however, has not in any way been allowed to disrupt the spirit of unity which has been a characteristic of the school since the beginning of the century when juniors were first admitted to Wynberg.”

1924 - the House System is introduced. “... the school was divided into four houses with the four quarters of the new badge differentiated as the house insignia and colours: Wellington, Rhodes, van Riebeeck and de Waal Houses, therefore came into being …” *

1922 - the prefect system is inaugurated, and a new school badge (as in use today) is seen for the first time in their handmade, silver lapel badges.

“The badge with its shield and four quarters was originally designed and proposed by Councillor Stefanus Nicholas Ponder as the official crest of the Wynberg Municipality. The insignia within the four quarters represented: Van Riebeeck, Three Rings; Cape of Good Hope, Anchor; Military Camp, Tent; Viticulture in the Constantia Valley, Vine. The old motto was Vivat Crestat Floreat Vitis, or ‘May the vine live, flourish and increase.’ “ … “Mr Clegg applied to the Wynberg Municipality for permission to adopt their crest, changing only the motto, once unanimity could be arrived at on the exact wording ... The Municipality readily agreed to the request, the prefects received their silver badges … and the blazer and cap badges appeared with Supera Moras subscribed in a convoluted scroll.” *

1911 - the boarding house closes due to a sharp decline in numbers, following the high cost of living increases in fees brought about by the national depression of 1908 - 1909.

An Oude Wijnberg Heritage synopsis. With grateful thanks to editors of the School Magazines from 1924 to the present day, and to the 'chroniclers' of our Schools:
Mr DH Thomson (The Story of a School, 1961)*
Mr Roger Goodwin (A School Reflects, 1991)
Mr Neil Veitch (Brothers in an Endless Chain, 2016)