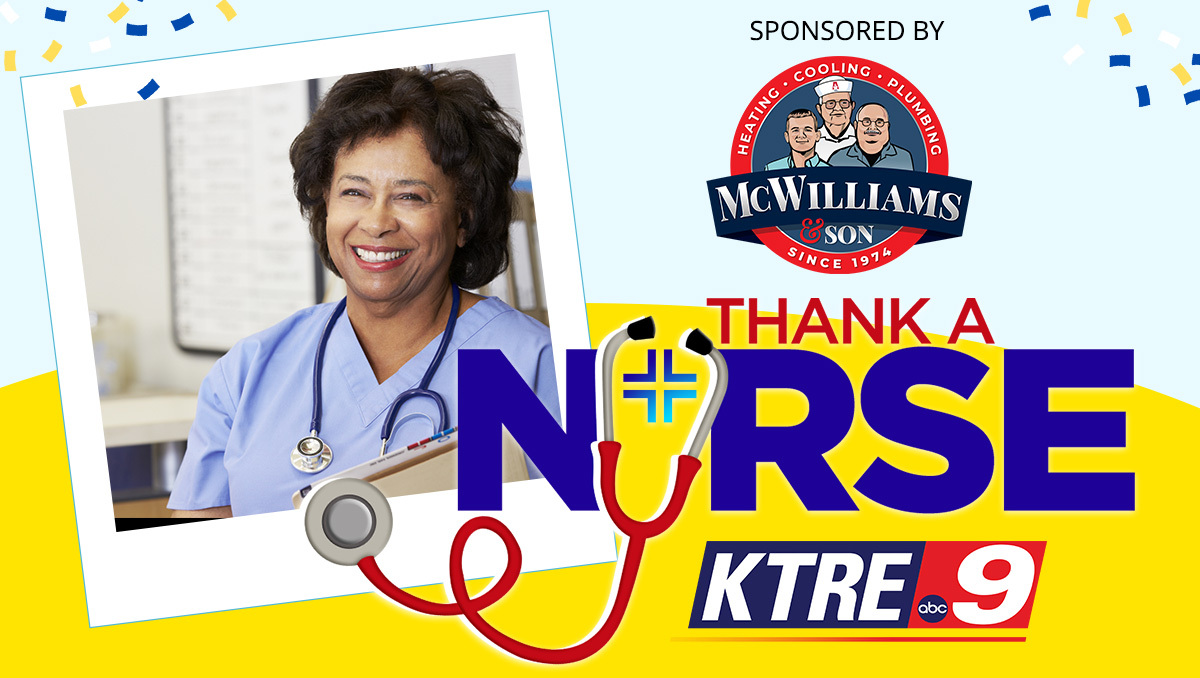 Our East Texas nurses are on the front lines showing compassion and helping to heal our loved ones. We want to thank these local heroes. Tell us about a wonderful nurse in your life. We will be showcasing the stories of these hardworking medical professionals on KTRE.

SUBMIT A PHOTO OF YOUR FAVORITE NURSE

SUBMIT A BIO ABOUT YOUR FAVORITE NURSE

SHARE THIS PAGE WITH YOUR FRIENDS TO NOMINATE THEIR FAVORITE NURSES

1.      Promotion Description.  This promotion is sponsored by KTRE 358 TV Road, Pollok, TX 75969 & McWilliam and Son Heating and Air Conditioning (“Sponsor”).  The promotion begins at midnight January 1, 2022 and ends at 11:59 p.m. on December 31, 2022. Nominations must be received by Midnight December 20, 2022.  Promotion is subject to local, state, and federal laws, and is void where prohibited.  By entering, each entrant accepts and agrees to be bound by these promotion rules. This promotion is no way sponsored by, endorsed by, or associated in any way with ShortStack.com. All times herein are Central time zone.

2.      Eligibility.  No purchase necessary to enter or win. Nurses nominated for this promotion must be legal U.S. residents of the following counties in the station’s viewing area: Camp County, Cherokee County, Franklin County, Gregg County, Rusk County, Smith County, Upshur County, Wood County, Angelina County, Houston County, Nacogdoches County, Sabine County, San Augustine County and must be 18 years of age or older at the time of entry. Nurses must also practice within the KLTV-TV/KTRE-TV viewing area, while being currently employed. Employees and immediate family members of employees of KLTV-TV/KTRE-TV, the other Sponsor(s), and their respective parent companies, affiliates, subsidiaries, agents, and their advertising and production agencies are not eligible to participate in this promotion. Text and messaging rates may apply.

3.      How to Enter Nomination.  There is one (1) way to nominate a nurse for the Thank A Nurse promotion.  Beginning at Midnight, January 1, 2022 individuals can log on to https://a.pgtb.me/f4hV3H and fill out the entry form. Nominations must be received by December 20, 2022 in order to qualify.  All Nominations become the property of Sponsor(s), and Sponsor(s) reserve(s) the right to use any information submitted by entrants.

Nominations must be filled out completely and legibly in order to qualify, and will be void if they are, in whole or in part, incomplete, illegible, damaged, irregular, counterfeit, altered, or obtained through theft or fraud.  Sponsor(s) is/are not responsible for lost, late, illegible, misdirected or mutilated Nominations, including due to transmission, technical, and/or network failures of any kind, including, without limitation, malfunctioning of any hardware or software (whether originating with sender or Sponsor(s)), telephonic failures, human error, or any other error or malfunction.  For online Nominations, the authorized account holder of the e-mail address submitted at time of entry will be considered the entrant.  An “authorized account holder” shall mean the natural person assigned to such e-mail account by the Internet access provider, online service provider, or other organization responsible for assigning e-mail addresses for the domain associated with such e-mail account.

Entrants agree not to upload, post or transmit any materials which contain any computer viruses, Easter eggs, worms, Trojan Horses or other harmful component or programming routines that are intended to damage, detrimentally interfere with, surreptitiously intercept or expropriate any system, data or personal information.  Any attempt to deliberately damage any web site or undermine the operation of the promotion is a violation of criminal and civil laws, and Sponsor(s) reserve(s) the right to seek damages from any person who makes such attempt(s).

Entry materials that have been tampered with or altered are void.  Any questions regarding the number of Nominations submitted by an individual or the authorized account holder of an e-mail address shall be determined by Sponsor(s) in its/their sole discretion, and Sponsor(s) reserve(s) the right to disqualify any Nominations by persons determined to be tampering with or abusing any aspect of the promotion.

4.      Ownership and Publicity Rights. By submitting an entry in any form, entrant represents and warrants that he/she owns the copyrights and moral rights to any and all artistic or commercial works contained in his/her entry, including any images, logos, music, videos, and/or literary or written content (even if such works are in the background). In exchange for the opportunity to participate in this promotion, entrant grants Sponsor(s) the perpetual, royalty-free, worldwide, and irrevocable right, but not the obligation, to use, edit, alter, copy, reproduce, disclose, display, publish, prepare derivative works from, perform, distribute, exhibit, broadcast, stream, embed, or otherwise exploit the entry, in whole or in part, whether in connection with the promotion or not, in any form, media or technology, now known or hereafter developed, including, without limitation, broadcast and cable television, radio, mobile transmission and the Internet, for any purpose whatsoever, including, but not limited to, advertising, promotion, entertainment and commercial purposes, without any payment to, or further authorization by, the entrant. Entrant represents and warrants that he/she has the right to grant all of the rights in this paragraph to the Sponsor(s), and that he/she has secured all third party rights, including but not limited to copyrights, trademark, and privacy rights contained within his/her entry. Entrant represents and warrants that the entry is original and that all factual statements contained in it are true and correct and not exaggerated. If at any time Sponsor(s) receive a request to remove any entry from Sponsor(s) broadcast, website, blog, twitter account, message board, podcast, social media profile, mobile application, or other media claiming entrant’s failure to secure or possess any of the rights contained herein, Sponsor(s) reserve(s) the right to remove the submission and eliminate entrant from further consideration in this promotion. If any entry: (1) contains material that is violent, pornographic, obscene, illegal, inappropriate, defamatory, or racially or morally offensive; (2) does not comply with these rules; or  (3) does not meet Sponsor(s) standards for any reason whatsoever, Sponsor(s) reserve the right to reject the entry as ineligible for submission. Please see our website’s Terms of Service for terms and conditions on content submissions.

6.      Social Media. To the extent this promotion is conducted on Facebook, Twitter, Google +, Vine, LinkedIn, YouTube, Tumblr, FourSquare, Instagram, Pinterest, Meetup, or Spotify (“Social Media Site(s)”), or any application associated with the Sponsor(s) on these websites, entrant agrees to abide by the guidelines, policies, or procedures of the application, the Social Media Sites, and these Rules. Sponsor(s) reserve(s) the right to remove any entrant from consideration for failure to abide by the guidelines, policies, or procedures of the application or the Social Media Sites, and to delete any of entrant’s related comments, posts, tweets, user generated content, or other electronic messages, communications, or submissions at its/their discretion. Sponsor(s) also reserve the right to block, ignore, and/or completely prevent any entrant, account, user, or profile from accessing the contest and/or the Sponsor(s) profile, account, blog or handle through the application or Social Media Site. Any questions regarding the identity or owner of the entrant’s social media profile, URL, twitter handle, blog, username, account, or email address shall be determined by Sponsor(s) in its/their sole discretion. Entrant agrees that Sponsor(s) are not responsible for the collection, disclosure, or dissemination of any personal information, whether directly or indirectly, by the Social Media Sites, third party advertisers, or any other transferees. By submitting an entry, entrant(s) understand(s) that the Social Media Sites and their third party advertisers may electronically collect, disclose, and/or disseminate personal information in their profile, account, or handle, whether publicly available and/or generated by their own activity, tracking cookies, bugs, or otherwise. Please see the Social Media Sites’ privacy policies and terms of use for more information. Entrant understands that unless explicitly identified as a Sponsor herein, this promotion is in no way sponsored by, endorsed by, administered by, or associated with the Social Media Sites. Entrants who create multiple social media profiles or accounts in order to increase his/her odds of winning may be disqualified by the Sponsor(s).

7.      Thank A Nurse Prizes. No prize may be exchanged for cash, transferred, or assigned by the Thank A Nurse winner(s).  Sponsor(s) reserve the right to substitute a prize, in which case a prize of equal or greater value will be awarded.

8.      How a nurse is selected: The showcased nurse will be drawn at random from list of submissions. Winners will be notified by phone from a member of KLTV/KTRE’s staff, who will also ensure the nurse is in good standing with his/her employer.

9.      Odds of Winning.  The odds of winning depend on the number of eligible Nominations received.

10.   Limitation on Liability.  By entering this promotion, each entrant forever discharges and releases Sponsor(s), its/their parent companies, subsidiaries, affiliates, and their respective directors, officers, employees, and agents from any and all liability, claims, causes of action, suits, and demands of any kind arising from or in connection with the promotion, including, without limitation, defamation, invasion of privacy, misappropriation of likeness, false light, copyright or trademark infringement, responsibility for property damage, loss of life, or personal injury or death resulting from or in connection with participating in the promotion or from or in connection with use or receipt of the prize(s), however caused. By entering this promotion, entrant fully and completely releases the Social Media Sites from any liability associated with or related to participation in this promotion.

11.   Sponsor’s Reservation of Rights.  These official rules are subject to modification by KLTV-TV/KTRE-TV.  In the event of a dispute, all decisions made by KLTV-TV/KTRE-TV are final and binding.  Sponsor(s) reserve(s) the right, in its/their sole discretion, to disqualify any person who tampers with the entry process or the operation of Sponsor’s/Sponsors’ web site(s), or who otherwise acts in violation of these official rules.  Sponsor(s) further reserve(s) the right, in its/their sole discretion, to cancel, terminate, or modify this promotion if, for any reason, the promotion is not capable of completion as planned (including, but not limited to, for the following reasons:  infection by computer virus, technical corruption, force majeure, or non-authorized human intervention that compromises or affects the administration, fairness, integrity, security, or proper conduct of the promotion).