The NEA Baptist Breast Imaging Center is dedicated to keeping women healthy and cancer free. With the addition of 3D mammography women now have the latest technology in mammography—3D—available here in northeast Arkansas.

What is 3D mammography?

3D mammography is a revolutionary state of the art technology approved by the FDA in February 2011, which gives radiologists the ability to view inside the breast layer by layer, helping to see the fine details more clearly by minimizing overlapping tissue. During a 3D mammogram, multiple low-dose images known as “slices” of the breast are acquired at different angles. With 3D technology, radiologists can view a mammogram in a way never before possible. 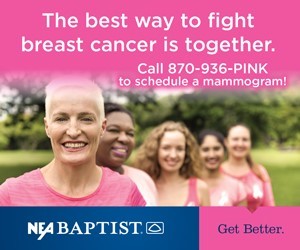 What are the benefits?

New technology sounds good, but how much radiation will I be exposed to?

3D mammography adds about 4 seconds per view to the compression time. Radiation exposure varies from person to person and is roughly equivalent to film/screen mammography. The amount of radiation is still below what the government sets as being safe.

Am I a candidate for 3D mammography?

Doctors and scientists agree that early detection is the best defense against breast cancer, which is why an annual mammogram and monthly self -exams are so important. 3D mammography has been shown in clinical studies to be more accurate than conventional mammography alone and all patients benefit from this revolutionary technology regardless of breast density or family history.

When should I schedule my first mammogram?

All women age 40 and older should have a screening mammogram every year. Women 18 or older with a family history of breast cancer should consult with your doctor.

Should I have a 3D mammogram even if I had one last year?

Yes! At NEA Baptist, we recommend that all women get a 3D mammogram every year as part of their annual mammography examination. Early detection provides the greatest chance for finding curable breast cancers and the best chance for early detection is with 3D mammography. Women should ask for this new technology, it is truly an important component in the screening process.

Does research support the use of 3D mammography?

A recent study published in The Journal of American Medical Association (JAMA) has found that the addition of tomosynthesis, a 3D imaging technique, to digital mammography was linked to a reduction in the number of patients being called back for additional testing and a rise in the breast cancer detection rate.

The study scrutinized data from 13 medical centers that had switched to 3D imaging. The researchers compared results from the years when the centers were using digital mammography alone compared to mammograms along with tomosynthesis (3D). They found a 15 percent reduction in recall rates along with a 41 percent increase in the detection of cancer.

Studies like the one cited above continue to reinforce the benefits of 3D mammography in breast cancer screening.

We are excited to provide this new technology to our patients, and we encourage every woman to take advantage of 3D mammography.