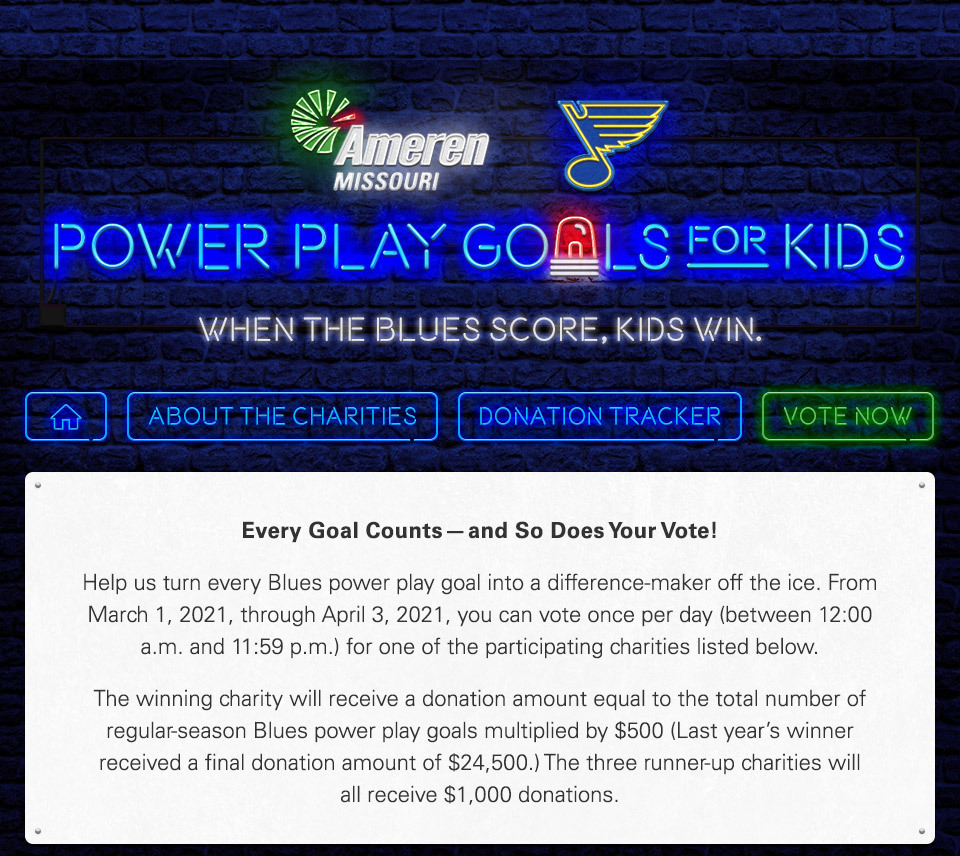 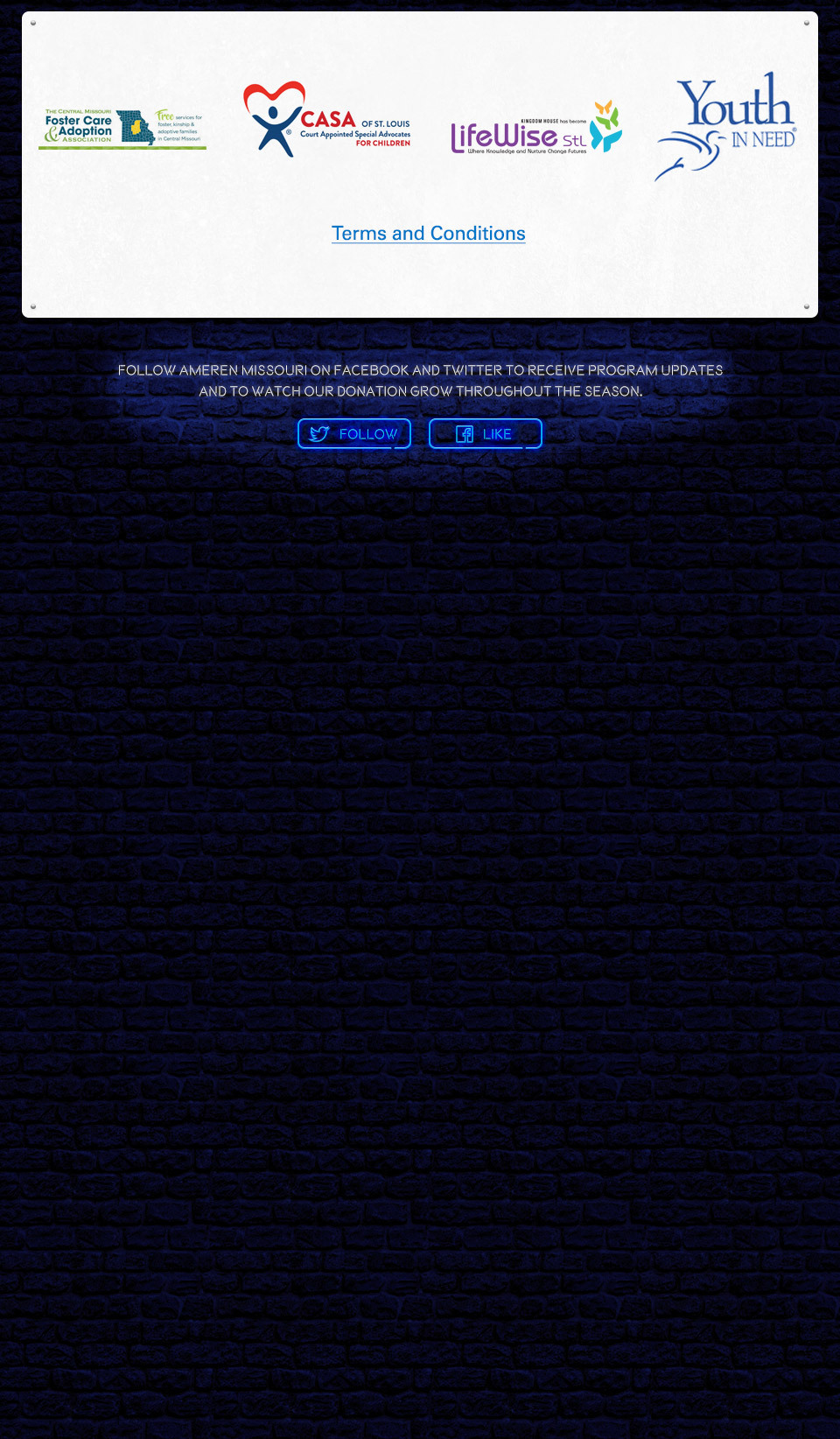 1.  NO PURCHASE NECESSARY TO ENTER OR WIN.  THE PURCHASE OF ANY GOOD AND/OR SERVICE WILL NOT INCREASE A PARTICIPANT’S CHANCE OF WINNING.

The above-referenced charitable organizations will be collectively referred to hereinafter as the “Charity(ies)”.

4.  TIMING:  The public voting period for the Promotion starts on March 1, 2021 at 12:00am Central Time ("CT") and ends on April 3, 2021 at 11:59pm CT (the “Promotion Period”).  All voting will cease at the applicable time and date, and all entries received thereafter will be considered disqualified and will be ineligible for participation.  If Administrator does not receive a vote for any reason, or if a vote is not entered correctly, the vote will be invalid.  Administrator’s computer will be the official time-keeping device for the Promotion.

5.  VOTING:  During the Promotion Period, the public can vote for their favorite eligible Charity by visiting AmerenMissouri.com/Blues (the “Website”), clicking on the “Power Play” tab located under the cover photo, entering their email address, and casting their vote for one (1) of the four (4) eligible Charities.

Limit: one (1) entry per email address per day is permitted.  If multiple votes are submitted by any single individual in the same day, only the first vote received by Administrator (as determined by the Administrator) will be entered into the Promotion.  Any votes that were cast with the use of any device or artifact in order to be entered multiple times will be disqualified, in Sponsors’ and/or Administrator’s discretion.  Automated votes are prohibited, and any use of automated devices will cause disqualification.  All votes will be deemed to have been submitted by the holder of the email from which it was sent. For these purposes, an email shall mean the primary person who is assigned to such email by the Internet access provider, online service provider, or other organization responsible for assigning email addresses for the domain associated with such email account.   Administrator and Sponsors are not responsible for, and shall not be liable for late, lost, misdirected, unsuccessful, or illegible votes for any reason.  Administrator and Sponsors reserve the right in their sole discretion to reject any vote for failure to fully comply with these Official Guidelines.  All votes become the sole property of Sponsors, and none will be returned.

6.  DONATION:  The Sponsors will make four (4) total donations, one (1) to each of the eligible Charities, as follows:

Approximate value of all donations made will be $24,500* (amount based on 49 power play goals scored by the St. Louis Blues during the 2019/2020 Regular Season).  *This amount is subject to change.

The reporting and payment of all tax liabilities incurred by any Charity as a result of the Promotion, including but not limited to federal, state, and local income taxes, is the sole responsibility of the Charity.  All federal, state, and local laws and regulations apply.  Each Charity is solely responsible for all other fees or costs associated with the donation received, regardless of whether it, in whole or in part, is used.  The Charity may be required to complete certain tax documents for the value of the donation and return it to the 14 Fund.  The donation is made AS IS and WITHOUT WARRANTY OF ANY KIND, expressed or implied, including, without limitation, any implied warranty of merchantability or fitness for a particular purpose.  The Charity may waive its right to receive the donation.  No substitution of the donation will be permitted, except by Sponsors, which may substitute a donation of equal or greater value if the advertised original donation becomes unavailable.  The donation is non-assignable and non-transferable.

7.  DETERMINATION OF WINNER:  All eligible votes received during the Promotion Period will be tallied by the Administrator on or about April 5, 2021.  In the event of a tie for the 1st Place Charity, the recipient of the 1st Place Donation will be selected by a qualified judging panel of Sponsors’ representatives based upon the extent of interaction and involvement the tied Charities have had with the Promotion, including without limitation, promoting the Promotion via social media, in public, etc.   Sponsors and/or Administrator reserve the right not to award the donation(s) in the event that an insufficient number of entries are received, as determined by the Sponsors and/or Administrator in their sole discretion.  The Sponsors’ and Administrator’s decisions in connection with all matters concerning the Promotion shall be final and binding.

8.  NOTIFICATION OF VOTING RESULTS:  The charities will be notified of the voting results by email on or about April 5, 2021.  Sponsor is not responsible for, and shall not be liable for late, lost, misdirected or unsuccessful efforts to notify the Charity, or for any change of the Charity’s contact information.  Upon donation forfeiture, no compensation will be given.

9.  DELIVERY OF DONATION:  The donation will be mailed by June 30, 2021.  The charities will have until May 15, 2021 to sign an affidavit of eligibility, a liability release, a publishing rights release, and/or a publicity release (where permitted by law), and/or complete tax documents, if applicable.  If the executed release or tax forms are not received on or by May 15, 2021, or in the event of otherwise non-compliance with these Official Guidelines, the donation may be forfeited and granted to the Charity with the next highest amount of votes.

10. LIMITATION OF LIABILITY:  By participating in this Promotion, all charities agree to these Official Guidelines and all eligibility requirements and all decisions of Sponsors.  BY PARTICIPATING IN THIS PROMOTION AND/OR ACCEPTING THE DONATION, ALL CHARITIES AGREE THAT THE SPONSORS, AND ALL OF THEIR RESPECTIVE OFFICERS, DIRECTORS, EMPLOYEES, REPRESENTATIVES AND AGENTS (COLLECTIVELY, ITS “REPRESENTATIVES”), WILL HAVE NO LIABILITY WHATSOEVER FOR, AND WILL BE HELD HARMLESS FOR, ANY LIABILITY, CLAIMS, INJURY, LOSS, OR DAMAGE OF ANY KIND, DUE IN WHOLE OR IN PART, DIRECTLY OR INDIRECTLY, INCLUDING WITHOUT LIMITATION, CLAIMS ARISING OUT OF PERSONAL INJURY, DEATH, PROPERTY DAMAGE, CLAIMS ARISING OUT OF THE CHARITY’S PARTICIPATION IN THIS PROMOTION OR THE ACCEPTANCE, POSSESSION, USE OR MISUSE OF THE PRIZE, CLAIMS BASED ON INTELLECTUAL PROPERTY RIGHTS, PUBLICITY RIGHTS, PRIVACY, OR DEFAMATION, OR CLAIMS BASED ON THE NEGLIGENCE OF SPONSOR.   Sponsor is not responsible if the Promotion cannot take place or if any donation cannot be awarded due to acts of war, natural disasters, weather or acts of terrorism, or any other acts or events beyond its control.  Charities further agree that Sponsors are not responsible for:  1) any incorrect or inaccurate information, whether caused by the charities, printing errors, or by any of the equipment or programming associated with or utilized in the Promotion; 2) technical malfunctions or failures of any kind, including without limitation, malfunctions, interruptions, traffic congestion, or disconnections in the telephone network, computer online system, computer dating mechanism, computer equipment, software, servers, providers, or any combination thereof; 3) unauthorized human intervention in any part of the Promotion, including theft, destruction, or unauthorized access to, or alteration of, entries; 4) technical or human error which may occur in the administration of the Promotion or the processing of the entries; or 5) any injury, damage, or loss to persons or property which may be caused, directly or indirectly, in whole or in part, from participant’s participation in the Promotion, or receipt, possession, acceptance, and/or use or misuse of any donation.

11. DISCLAIMER:  If for any reason the Promotion is not capable of running as planned, including due to infection by computer virus, bugs, tampering, unauthorized intervention, fraud, technical failure, human error or any other causes beyond the control of the Sponsors that corrupt or affect the administration, security, fairness, integrity, or proper conduct of the Promotion, Sponsors reserve the right, in their sole discretion, to disqualify any Charity (and all of its votes) that tampers with the voting process, and to cancel, terminate, modify or suspend the Promotion, or any portion thereof. In the event of early termination or cancellation of the Promotion, Sponsors may award recognition to a winner based on the number of eligible votes received prior to termination or cancellation.  CAUTION: ANY ATTEMPT BY A CHARITY TO DELIBERATELY DAMAGE ANY WEB SITE OR UNDERMINE THE LEGITIMATE OPERATION OF THE PROMOTION MAY BE A VIOLATION OF CRIMINAL AND CIVIL LAWS, AND SHOULD SUCH AN ATTEMPT BE MADE, SPONSORS RESERVE THE RIGHT TO SEEK DAMAGES FROM ANY SUCH ENTITY TO THE FULLEST EXTENT PERMITTED BY LAW.

12. RELEASE:  BY PARTICIPATING IN THIS PROMOTION, EACH ELIGIBLE CHARITY ACKNOWLEDGES THAT DETAILS OF ITS PARTICIPATION MAY BE USED IN SPONSORS’ ADVERTISING AND MARKETING MATERIALS, IN SPONSORS’ SOLE DISCRETION.  Specifically, by participating in the Promotion and/or accepting the donation, the charities agree that the Sponsors and their Representatives, and those acting under the authority of the Sponsors or their Representatives, may use (or refrain from using) information about the Charity (including but not limited to name, (including trademarks, trade names, and copyrights), biographical information, pictures, video, and/or any other digital representations thereof, for any and all advertising and promotional purposes in any and all media now known or hereafter invented (including but not limited to digital and print media) without territorial or time limitations and without further consideration, at the sole discretion of the Sponsors, unless prohibited by law, without notice to the Charity.  The Charity will have no right of approval, no claim to any compensation, or no claim arising out of the use, alteration, distortion, or illusionary effect or use in any composite form of the Charity’s name, biographical information, pictures, video, or any other digital representations thereof.

13.  GOVERNING LAW AND JURISDICTION:  Except where prohibited, all participants agree that: 1) any and all disputes, claims, and causes of action arising out of or in connection with the Promotion or any donation awarded shall be resolved individually, without resort to any form of class action, and exclusively by a state or federal court having venue in Saint Louis City, Missouri; 2) any and all claims, judgments, and awards shall be limited to actual out-of-pocket costs incurred, including costs associated with entering this Promotion, if any; and 3) under no circumstances will participant be permitted to obtain awards for, and participant hereby waives all rights to claim, indirect, punitive, incidental, and consequential damages and any other damages, other than for actual out-of-pocket expenses, and any and all rights to have damages multiplied or otherwise increased.  All issues and questions concerning the construction, validity, interpretation, and enforceability of these Official Guidelines, or the rights and obligations of the participant and the Sponsors in connection with the Promotions, shall be governed by, and construed in accordance with, the laws of the State of Missouri, without giving effect to any choice of law or conflict of law rules (whether of the State of Missouri or any other jurisdiction), which would cause the application of the laws of any jurisdiction other than the State of Missouri.

*Ameren will provide to 14 Fund the funds for the donation.  At the completion of the Promotion, 14 Fund will then pay out the donation to the Charities. 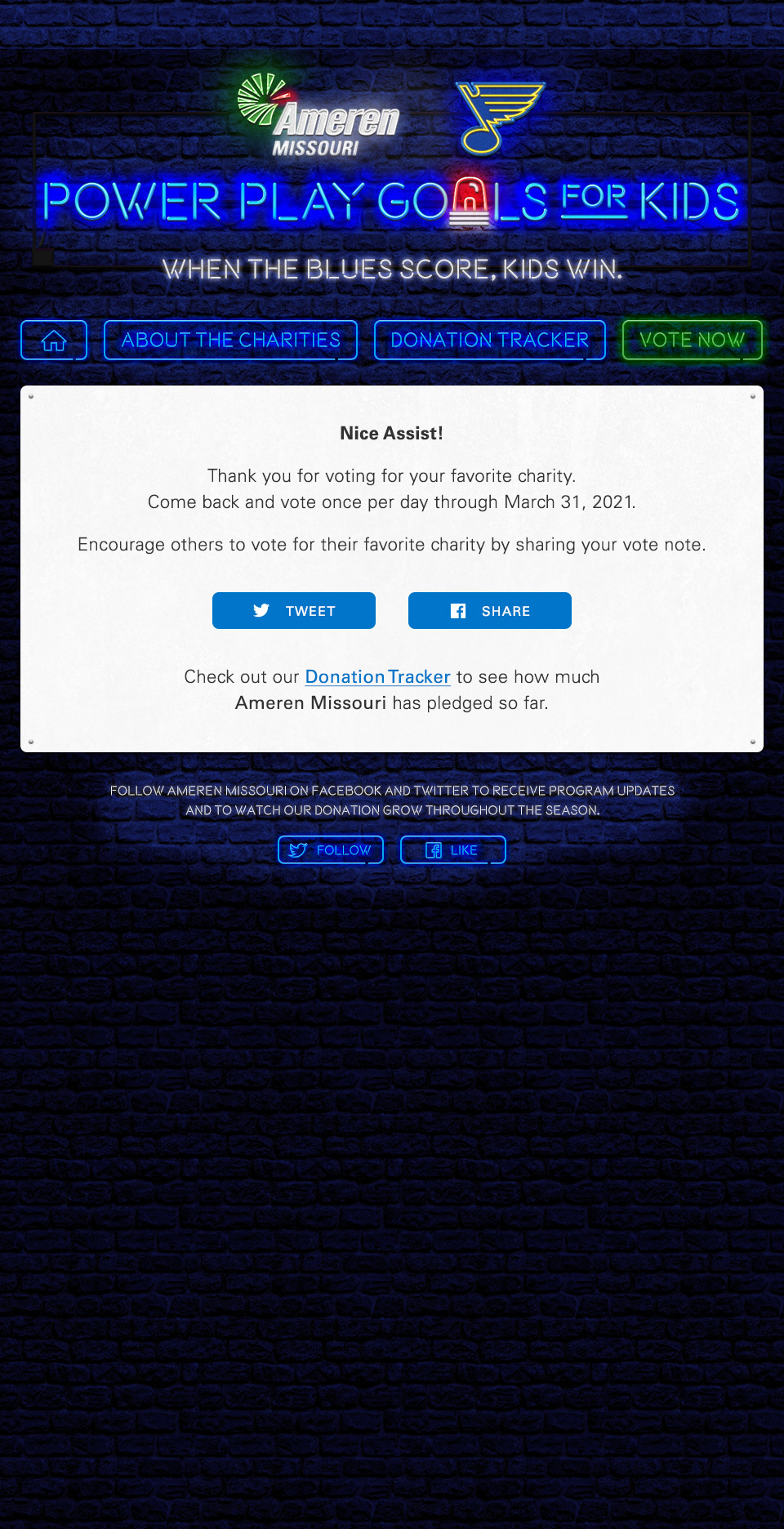