Order FACE TIME and be entered to win a $100 gift card!

"Face Time is a gripping fast-paced thriller with an important story and an engaging and unusual heroine."
Sara Paretsky

Whether you order in person at your favorite local bookshop or through a big-box online bookstore, you have two chances to win a $100 e-gift certificate to the online bookseller of your choice. And 5 lucky entrants will win a copy of PRIME TIME.

2. Fill out this entry form and include the name of the book seller and your order or receipt number. Press Submit. Voila, you're entered! 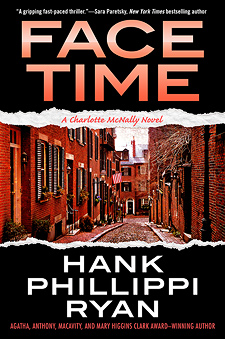 Revenge. Romance. The Ratings.
She's smart, savvy, and determined but has Charlie's latest TV investigation marked her - or someone she loves - as a killer's next victim?

You loved "Making a Murderer" and Serial: Season 1, now you'll love Charlie's KILLER new case. Tackling the tragedy of a potentially unfair conviction and the outcry for justice, Charlie enlists her local Innocence Project to fight a battle for truth.

The good news: she's got explosive evidence to free an innocent woman from prison.

The bad news: will that make Charlotte—and someone she loves—the real killer's next target? And what will happen if the convicted murderer is actually guilty?

The action-filled page turner is not only filled with thrilling twists, but also with a twist of romance as readers meet the incredibly sexy new love of Charlie's life.

Thanks for ordering and entering!

Winners will be notified by April 22 and announced shortly there after.

Have book club, book-loving friends, or another mystery fan in the family? Share with them!